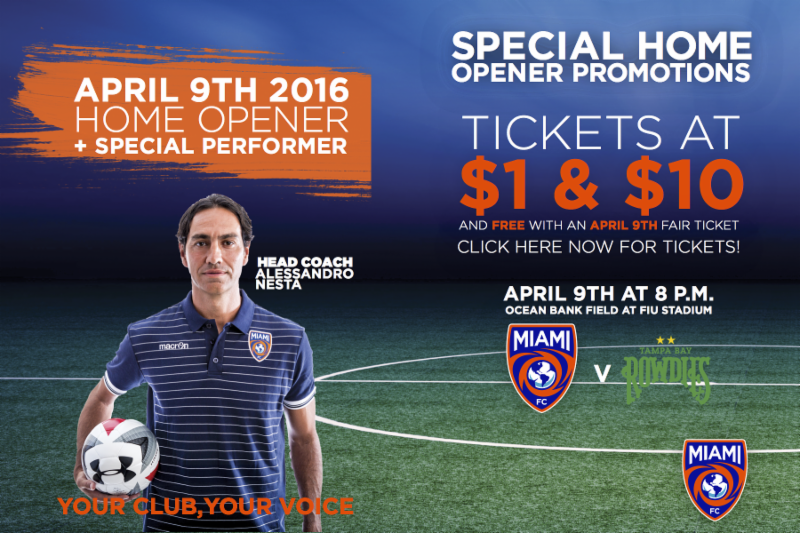 The club motto is ‘Your Club, Your Voice’ because Miami FC wants the people of Miami – you, the fans and the businesses and communities of the city – to be at the heart of everything the club does. Miami FC aims to reflect the best of Miami – excitement, vibrancy, fun and, of course, success on the field. As a part of the North American Soccer League, the Miami FC is made up of 24 players representing eight different countries with Italian soccer star, Alessandro Nesta, as their head coach. Some recognizable names on the squad are: midfielder Wilson Palacios, who’s a former English Premier League and Honduran National team player, forward Dario Cvitanich, former Ajax and Boca Juniors star, and Matuzalem, Brazilian midfielder who spent the majority of his career in the Italian Serie A.
The team will compete in the U.S. Open Cup, host international friendlies and will embark on their NASL season starting in April. The Miami FC inaugural home opener is set for April 9th at 8 p.m. at Ocean Bank Field at Florida International University against fellow Florida rivals, the Tampa Bay Rowdies.
The home opener will be a day full of excitement as Miami’s only professional soccer team hits the pitch for the first time. Be a part of history with Miami FC and get your tickets today! For tickets and information, please visitMiamiFC.com
Please note that the Chamber in occasion of its 25th Anniversary is offering complementary tickets to its members and friends for the opening match of the season on April 9th. The Chamber will have also a reserved area within the stadium.

Pass by the Chambers’ office in Downtown Miami to pick up the tickets (Maximum 6 tickets per person).